Recent developments in radio networking technology prompted me to revisit the subject of SCBA Telemetry. I have always held the belief that SCBA Control should be part of an overall incident command and control system.

At last years AFAC event in Melbourne I met with a major developer of Safety Equipment who I had been in contact with for a number of months regarding SCBA telemetry. I was shown their leatest telemetry system and was pleased to learn it featured 90% of the features that I had been ranting on about for over two years. I belive the new system is going to be released later this year and I have to say it represents a huge step forward in providing reliable telemetry, and should put this manufacturer ahead of the competition.

Over the past couple of years I have been working with a number of colleagues on a technology that will significantly extend the duration of SCBA. The technology has been proven and now requires testing and refinement prior to commercialisation. It is highly likely that the testing will be undertaken by Griffith University here in Queensland. I am currently seeking the capital that will allow the testing to begin and I am also in discussions with a number of government agencies for additional grant funding. This is a very exciting project and I look forward to beginning the testing.

As mentioned I am currently seeking funding in order to undertake the testing and refinemet of the technology prior to commercialising. The total cost for producing the test equipment and having the tests conducted is estimated to be $500.000, although it is expected that grant funding will meet approximately half of this cost leaving a funding requirement for $250,000. For a number of reasons "crowdfunding" has been chosen as being the best option for funding and we are currently working on a presentation that we hope will go live towards the end of this year (2020). 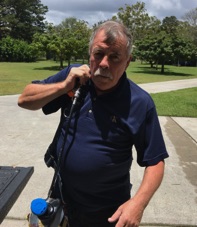 Sad loss of another friend and colleague

Long time friend and colleague Andy morrision pased away following a short illness. Andy was retired firefighter and ex Manager of Interspiro Asia Pacific. Andy and I have been friends for many years and have worked on a number of Breathing Apparatus projects together. Could always rely on Andy for a down to earth answer to a problem and his expertise was much valued.

Andy leaves behind a partner, children and grandchildren.

Andy you are sadly missed.

Siebe Gorman Pty Ltd (a company with a history dating back nearly 200 years) was placed into liquidation by one of its creditors. Unfortunately the liquidation has left a number of creditors owed significant amounts of money.